Don’t Be That Guy

We can’t tell you how many times guests step in front of our video cameras to take their own photos or videos. It happens the most during the kiss or the ring exchange. The video above was from a Newscast in Sacramento, and we just had to share.

Below is an article we found of the Huffington Post. You can find a link to the article at the bottom.

How To Nicely Tell Wedding Guests Their Phones Aren’t Invited

Just before Heather Letostak’s wedding ceremony began, the priest made an announcement: No phones allowed.

“He kind of joked around,” said Letostak, who got married in May. “He pulled his cell phone out of his pocket and told the guests, ‘The bride and groom have requested that you guys sit back, be present in the moment and turn off all your devices.’”

While a few people still snuck pictures, Letostak said most turned their full attention to her and her husband Brian’s ceremony, which took place on a farm in Akron, Ohio. Now she urges engaged friends to unplug their weddings, too.

“Whenever anyone asks about wedding advice, I say, ‘Think about an unplugged wedding,’” Letostak said. “‘You tell people to put down their cell phones, put down their iPads, whatever electronic device they have, and be with you in that moment. They’re going to be able to take that moment longer in life with them than a picture might last.’”

As people become increasingly aware of how annoying their phone addictions can be, they’re more accepting of requests to power down during wedding ceremonies. Brides and grooms who want their guests to fully participate in their big day instead of Instagramming it have started telling guests to turn off their devices, usually just for the duration of the ceremony.

Letostak got the idea for an unplugged wedding after reading a 2013 HuffPost commentary by Corey Ann Balazowich, a photographer in North Canton, Ohio, who eventually ended up photographing Letostak’s wedding.

Exuberant guests and their electronic devices are ever-present at weddings, Balazowich said. Guests have ruined some of her photos with their phone camera flashes and by jumping into frames to take pictures. Once, she even failed to get a photo of a couple’s first kiss because a family friend maneuvered in front of her right at that crucial moment.

“I didn’t get the actual kiss because it was a quick kiss,” she said, adding that she could tell the newlyweds were “a bit disappointed.” 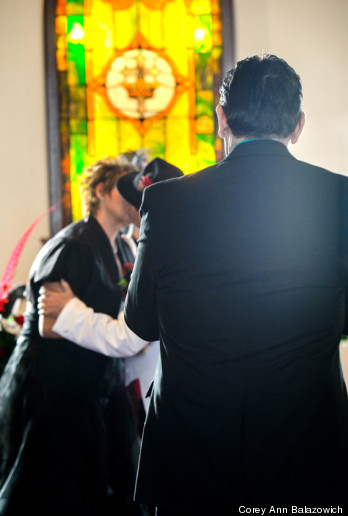 Balazowich has also heard ringtones interrupt a ceremony and kids playing video games throughout the event.

So how do you tell your guests that their phones aren’t welcome at your wedding? Anna Post, co-author of Emily Post’s Wedding Etiquette, Sixth Edition, said there are a few ways to do it. You can include an enclosure in the invitation to give guests a heads up. It’s a good idea to have the officiant or best man make an announcement ahead of the ceremony reminding everyone to turn their devices off, she said, and you can include a mention of the request in the program. A sign outside the venue is less discrete, but gets the point across.

“Whatever message you take, it needs to be nicely put,” Post said. “Get ‘please’ in there.”

Post said that it’s entirely fair to ask that guests turn their full attention to the ceremony, but restricting people from using their phones during the reception may be going too far.

“They’re going to want to take photos, maybe with each other,” she said. “They’ll want to check in with the kids or the babysitter.” 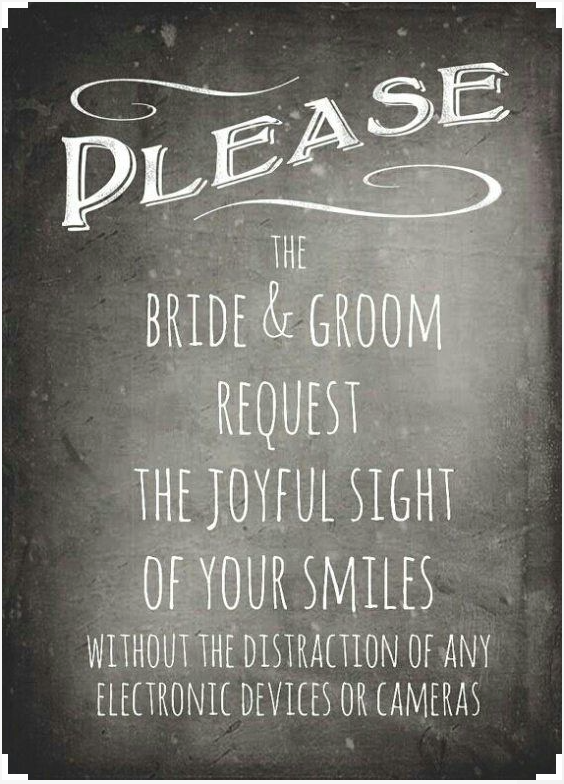 Some couples take more dramatic steps to get their guests to power down. Xochitl Gonzalez, co-founder of AaB Creates, an event design and planning firm based in New York City, said she has set up a phone-check station and collected phones before ceremonies. One couple that had a destination wedding in Maine asked guests to turn off their phones for the entire weekend.

Gonzalez said it helps to add something like a photo booth so that people can still feel like they’re documenting something they can take with them.

“We’re addicted to documenting things now,” she said. “You can satiate the addiction, but in a controlled environment.”